This article originally appeared in the IHBC NewsBlogs 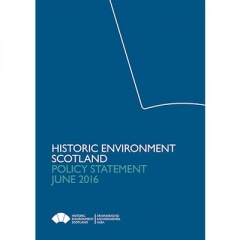 The Scottish Ministers have delegated to Historic Environment Scotland the following functions: Their general functions of managing the properties in care including ensuring their conservation, articulating and safeguarding their cultural significance, providing public access for current and future generations, and managing the associated commercial operations; and the functions of the Scottish Ministers under sections 13, 15(3) to (4), 19 (other than subsections (3) and (4)) and 20 of the Ancient Monuments and Archaeological Areas Act 1979.

This policy statement sets out the principles under which Historic Environment Scotland (HES) operates and provides a framework that informs the day-to-day work of a range of organisations that have a role and interest in managing the historic environment, it is intended to be of particular use to those carrying out statutory functions which are affected by the changes resulting from the 2014 Act. The policy statement complements and should be read alongside the Scottish Planning Policy and other relevant Ministerial policy documents. The policy statement is a relevant document in the statutory planning, Environmental Impact Assessment (EIA) and Strategic Environmental Assessment (SEA) processes.

The SHEP was originally developed as a series of individual free-standing documents. The single, combined SHEP was first published in October 2008 and revised in July 2009 and December 2011. This has now been superseded by arrangements put in place to create Historic Environment Scotland (including the Framework Document and Schemes of Delegation – which can be seen on Historic Environment Scotland's website) and this policy statement.

All references to the above principal Acts in this policy statement are to be read as having been amended by the Historic Environment Scotland Act 2014.

A UK Marine Policy Statement adopted by all the UK administrations provides a framework for considering the historic environment in the preparation of Marine Plans, which in turn guide decisions affecting the marine environment around Scotland (see Note 0.1).

Retrieved from "https://www.designingbuildings.co.uk/wiki/Historic_Environment_Scotland_Policy_Statement"
Create an article