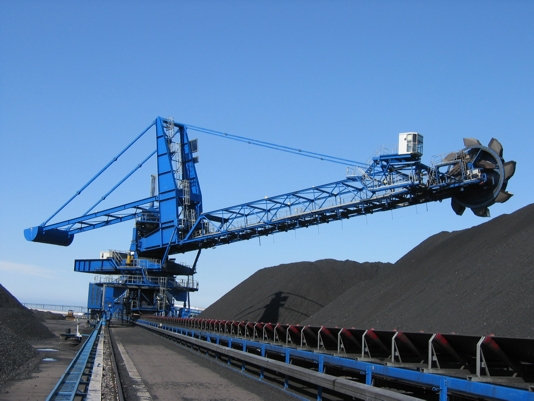 Stacker are large pieces of plant used predominantly to handle bulk materials such as ores and coal. They are typically used with a reclaimer, which recovers the material.

Stackers typically move on a rail between stockpiles in a yard, using traction motors powered by direct current. This allows them two directions of movement – horizontally along the rail and vertically by luffing (raising and lowering) its boom. Some stackers can also rotate the boom, allowing stockpiles to be formed on either side of the rail.

A controller operates the stacker from a cabin which is usually positioned above the boom.

Stackers can stack in different patterns. Cone stacking tends to cause coarser material to move out towards the base in what is known as size segregation. Chevron stacking is where the stacker builds up layers of material while travelling the length of the stockpile.

Retrieved from "https://www.designingbuildings.co.uk/wiki/Stacker_bulk_material_handling"
Create an article