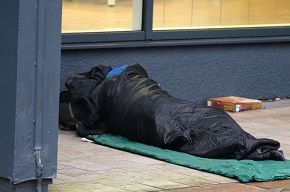 In August 2018, the government unveiled its Rough Sleeping Strategy, with the aim of ending rough sleeping in England by 2027.

It is estimate that 4,750 people sleep rough in England on any given night; a number that has risen over the last seven years.

The government has pledged £100 million to help the homeless, from efforts to prevent them ending up on the streets in the first place, to providing support for mental health and addictions, and further funding for housing.

Around £50m will be used to build more social housing outside London for those who are able to move on from hostels or refuges.

Communities Secretary James Brokenshire conceded that the £100m did not constitute entirely new funding, with half of it being “reprioritised” from existing budgets. He said; "Half of it is already being committed to homelessness and rough sleeping. The other remaining half is money that is new to rough sleeping and homelessness, reflecting and recognising priorities.”

Polly Neate, chief executive of Shelter, said: "This is a step forward and not a total fix for homelessness. We still need to tackle the chronic lack of genuinely affordable homes, deep instability of renting and problems with housing benefit that are leaving so many without a home."

Labour shadow Housing Secretary John Healey said that it was; "a feeble plan that lacks any urgency to tackle the crisis of rising rough sleeping", and reaffirmed that a Labour government would end rough sleeping within its first term by making 8,000 homes available to those with a history of sleeping on the streets.

Retrieved from "https://www.designingbuildings.co.uk/wiki/Rough_Sleeping_Strategy"
Create an article