Rights to light in the USA 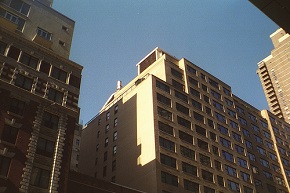 In the UK, the right to light refers to the right to receive sufficient light through an opening (such as a window), allowing ‘ordinary’ comfortable use and enjoyment of a dwelling, or ‘ordinary’ beneficial use and occupation of other buildings. The right to light in the UK goes back to general property law relating to easements that originating during the rule of William IV. The Ancient Lights were superseded by the Prescription Act in 1832.

In the US however, most such rights were abolished following the introduction of electric lighting. This means there is no law at the federal level that protects the individual’s right to light unless there is an express easement or restrictive covenant. A right to unobstructed light may be created by private parties agreeing an easement, or through the adoption of other conditions, covenants or restrictions.

Several court cases have dealt with attempts to block developments on the grounds of infringing a general right to light, with the precedent being set by the case of ‘Fontainebleau Hotel Corporation v. Forty-Five Twenty-Five Inc.’ [1959]. The judge held that there is ‘no legal right to air and sunlight’, even if the development in question causes injury or damage to its neighbour.

This has meant that conflicts are often resolved through state-level legislation. In 1984, Proposition K was passed in San Francisco, blocking the construction of any building that would surpass 40 ft and cast a shadow on a public park. The state of Massachusetts has similar laws relating to shadows cast on public places and open spaces.

Retrieved from "https://www.designingbuildings.co.uk/wiki/Rights_to_light_in_the_USA"
Create an article