The term ‘perpend’ refers to the vertical joints between blocks or bricks that have been laid in a horizontal course to form a wall. Perpends are normally filled and sealed with mortar. The horizontal mortar joint in a wall construction is typically referred to as the bed joint. 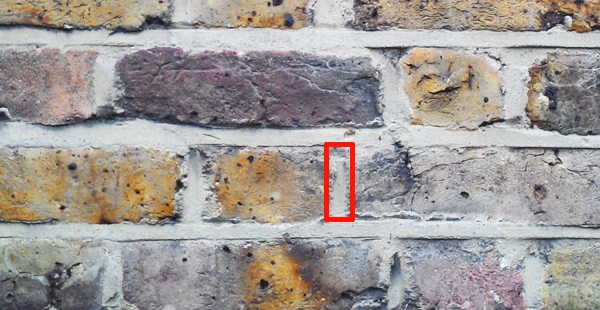 Rather than being filled with mortar, perpends may also be left open to form weep holes or cavity ventilators. These provide openings that allow the drainage of moisture from within a wall construction and allow ventilating air to the back of a wall to help prevent mildew, dry rot and damp. They are generally formed by plastic inserts into the perpends, as these form a more uniform opening compared to simply leaving a void. See weep holes for more information.

A perpend stone is a long stone that extends between the inner and outer layers of a stone wall, tying the two layers together. The stone is ‘dressed’ at both ends.

The term ‘perpend’ may also be used more generally to refer to any brick or stone the longest dimension of which is perpendicular to the face of the wall. See bond stone.

The expression “keeping the perpends” is a term used to describe what happens when cross joints or transverse joints in brickwork are maintained in a perpendicular line.

Retrieved from "https://www.designingbuildings.co.uk/wiki/Perpend"
Create an article