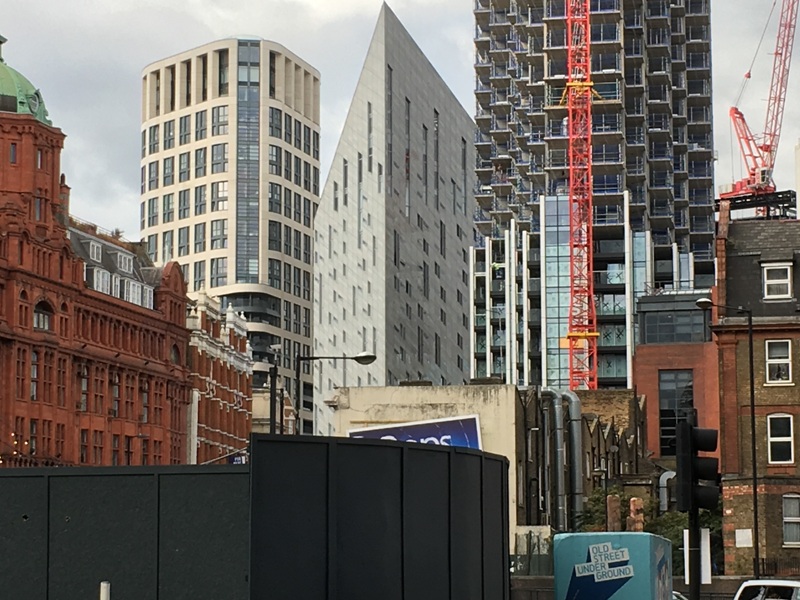 M by Montcalm is a 23-story hotel near Old Street tube station in Shoreditch, London. It was designed by architects Squire and Partners and delivered in collaboration with Executive Architects 5 Plus. It was completed July 2015.

The unusual building design was based on the proximity of the hotel to Moorfields Eye Hospital, which sits opposite it. The architects suggest that the facade ‘…expresses the idea of the optical and the visual’ and takes inspiration from the hypnotic, illusionary artwork of Bridget Riley.

The building is expressed by conflicting patterns of transparency, opacity and solidity, and includes confusing angles that break down the geometry of the underlying structure. Vertical and diagonal lines create a visual effect of depth and movement that appear to contradict the buildings actual form. At the lower levels, the building skin is lifted on a visually disorientating slant to reveal the hotel lobby, public bar and restaurant.

M by Montcalm has not been without controversy, being described as ‘very unfortunate for any hungover hipsters’, and ‘a myopic optical ruse that must have been hypnotic enough to secure it planning’. It was nominated for the Carbuncle Cup in 2015, an annual architectural prize awarded by the magazine Building Design to the ugliest building in the United Kingdom completed in the last 12 months. It was ‘beaten’ that year by the Walkie Talkie (20 Fenchurch Street).

Retrieved from "https://www.designingbuildings.co.uk/wiki/M_by_Montcalm"
Create an article