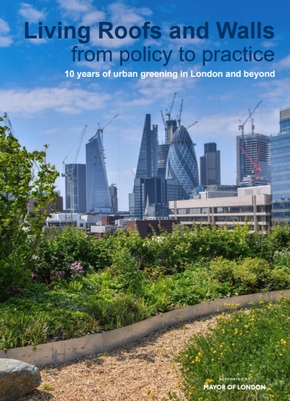 On 10 April 2019, Livingroofs.org published Living Roofs and Walls, from policy to practice, 10 years of urban greening in London and beyond revealing the growth in green roof space in London during the past 10 years.

The report was launched by Shirley Rodrigues, London’s Deputy Mayor for the Environment, at the European Urban Green Infrastructure Conference (EUGIC). It assesses the delivery of the Living Roofs and Walls Policy that was included in the London Plan in 2008 and how the policy has encouraged uptake in the absence of any financial incentives or mandatory requirement. It was published by the European Federation of Green Roof and Green Wall Associations and Livingroofs.org on behalf of the Greater London Authority and was written by Dusty Gedge and Gary Grant, internationally recognised authorities on urban green infrastructure and authors of the original London technical report.

The report marks the next step in making the case for urban greening. It will be supported by:

In the foreword to the report Shirley Rodrigues wrote:

“I was privileged to be leading the Greater London Authority’s Environment Team when the first green roof policy was included in the London Plan in 2008. In the intervening 10 years I have been delighted to witness the patchwork of green roofs and walls spreading across London’s skyline, alongside the establishment of a world-class industry that is working towards the greening of London and other cities and which is, moreover, supporting our objectives on air quality, climate resilience and biodiversity.

“We have introduced an Urban Greening Factor into the London Plan to ensure that all new major development includes an element of greening which contributes to making the city healthier, wilder or more resilient. This is urban greening as infrastructure not as ornament, and it is essential if we want to create the sustainable cities of the future that we urgently need.”

You can read the report in full at: https://livingroofs.org/wp-content/uploads/2019/04/LONDON-LIVING-ROOFS-WALLS-REPORT-2019.pdf