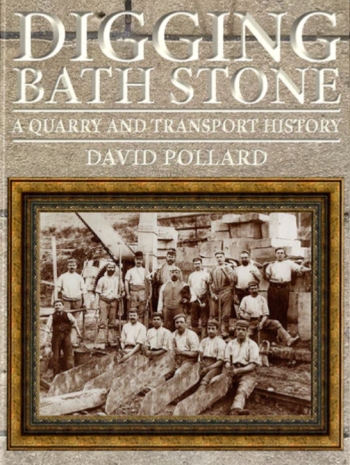 Digging Bath Stone is the culmination of a lifetime’s work by its author, David Pollard. Sadly, he died in 2017, so was never to see this remarkable study in print. Praise also needs to be given to Neil Parkhouse of Lightmoor Press, who over the next three years edited, designed and filled in the gaps in Pollard’s final text. A mammoth task.

David was uniquely qualified to write this reference book. A technical education at school was followed by an apprenticeship in boiler making, building steam engines in Swindon. Leisure time in the early 1960s was spent discovering abandoned quarries near Corsham. Moving on to qualify as a mechanical design engineer, he became an industrial archaeologist, founding the Bath Stone Quarry Museum Trust in 1984. When acting as an archaeological consultant for the Combe Down Stone Mine, he bought the Pickwick Quarry (now the well-known Hartham Park Quarry) and brought it back into production. And for over 50 years he researched the traditions of quarrying Bath stone.

The book is not confined simply to winning stone. It provides great insights into a whole industry, with chapters on its history, the quarrymen, families and firms who worked the quarries, and their tools and methods. The largest chapter covers nearly 200 pages on the quarries alone, with another 120 on haulage and transport, which was essential to the success of the industry. The whole tome is richly illustrated with black-and-white photographs, many of them from the 19th century. Remarkably, most of the individuals photographed are named. The author is at pains to ensure correct nomenclature is used, insisting that ‘mines’ be referred to as ‘underground quarries’, as they were locally known. Indeed, very helpfully, he starts the book with a glossary of quarrymen’s terms, which itself is a valuable historical legacy.

Bath stone seems to have been first quarried by the Romans, whose buildings were later used as quarries by the Saxons. The industry started to grow during the medieval period, most probably utilising stone that was won from near the surface on hillsides south of Bath. The first reference to underground digging dates to 1663. It was the pioneering work of developer Ralph Allen in the early 18th century which led to a big expansion in quarrying by using a railway to access the River Avon. This growth continued until the late 19th century, the industry being concentrated in a triangle between Bath, Corsham and Bradford-on-Avon. A minor criticism of the book is that it lacks a map identifying the quarries cited, although this omission is conceded in the preface.

Digging Bath Stone will particularly appeal to industrial archaeologists, geologists, historians and those with an interest in the use of stone in buildings. It is laced with fascinating stories of individual achievements, gruesome accidents, misdemeanours and the harsh conditions of working underground with predominantly hand tools. The building conservation professional should also find much of value. The materials used to build a historic building are an essential component that add to its significance. Understanding how the stone was won and the sacrifices and ingenuity needed to produce it, all add to the reasons why such structures merit conservation.

As Pollard reminds us, a quarryman needed to be skilled, and it was generally accepted that it took at least three years before such an individual was thought of as good. And for repairs, replacements and extensions, using authentic stone is an important way to maintain the tradition, even though today’s production methods will be vastly different to those that David Pollard so vividly brings to light.

This article originally appeared as ‘A life with stone’ in Context 170, published by the Institute of Historic Building Conservation (IHBC) in December 2021. It was written by Chris Wood, now retired from Historic England, where he led the building conservation and research team.

Retrieved from "https://www.designingbuildings.co.uk/wiki/Digging_Bath_Stone:_a_quarry_and_transport_history"
Create an article