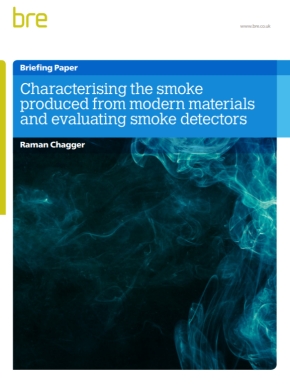 Characterising smoke from modern materials and evaluating smoke detectors was written by Raman Chagger and published by BRE in 2014.

The object of this research was to investigate the smoke profiles generated in fire tests specified in the EN 54-7 (commercial) and EN 14604 (domestic) smoke detector standards, and to compare them with smoke produced from burning or smouldering materials commonly found in today‘s service environment.

The four test fires used to assess smoke detectors were developed in the 1980s and represent a broad range of smoke types expected in commercial and domestic environments at the time. However, the materials used in modern homes have changed significantly in recent decades. This research investigated whether smoke detectors could respond to the smoke produced from those new materials during a fire.

The smoke characteristics for a range of new materials were measured and compared with the four test fires. The performance of approved ionisation and optical smoke detectors to the smoke produced from these materials was also assessed. It was confirmed that both ionisation and optical smoke detectors are attuned to detecting certain types of fires and that existing standards remain suitable for assessing these technologies.

The knowledge gained from this study enabled more challenging test fires to be developed that were used during multi-sensor research work.

The contents of the briefing paper are:

Retrieved from "https://www.designingbuildings.co.uk/wiki/Characterising_smoke_from_modern_materials_and_evaluating_smoke_detectors"
Create an article