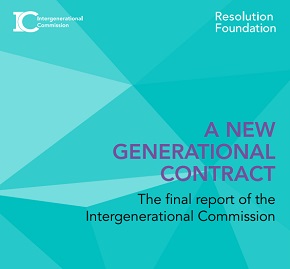 In May 2018, the influential thinktank the Resolution Foundation published a report following a two-year study into intergenerational fairness.

David Willetts, the former Conservative universities minister, chaired the panel, which also included Frances O’Grady, the TUC Secretary General, and Carolyn Fairbairn, the CBI Director General. According to Fairbairn, the conclusions were built around the acceptance that the ‘tacit deal in which the young look after the old and the old help the young have a better life than the generation before’ had demonstrably broken down.

As well as suggesting policies such as a £10,000 ‘citizen’s inheritance’ given to every 25-year-old, the Commission proposed several ideas relating to the housing market:

You can learn more about the report here.

Retrieved from "https://www.designingbuildings.co.uk/wiki/A_new_generational_contract"
Create an article