Growing Cities, How can England’s successful cities build the homes we need?

Growing Cities, How can England’s successful cities build the homes we need?was published by by the Institute for Public Policy Research (IPPR) and Shelter in July 2015. It was written by Matt Griffith and Pete Jefferys and addresses ways in which England’s growing cities can build enough new homes to accommodate their success. 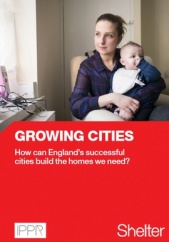 The report proposes that these are economically-successful mid-sized English cities that are being held back by chronic housing pressures, suggesting that if economically-buoyant areas cannot deliver new homes, there is little hope for the rest of the country.

It suggests that the key barriers to home building are; not enough land, and the wrong development incentives.

The report states, ‘Cities offer the clearest and strongest long term prospects of building more homes. In addition to political will, growing cities also have the underlying economic base to support a new approach to housing growth. They need better tools in their armoury to get more and better homes built on both brownfield and greenfield sites while commanding local popular support.'

The report cites; Lord Heseltine’s growth review, Labour’s Lyons Housing Review, the City Growth Commission, work by the Centre for Cities, and by URBED, the winners of the Wolfson Economics Prize 2014, and suggests that it is necessary to devolve powers and budgets to cities, recommending that:

Retrieved from "https://www.designingbuildings.co.uk/wiki/Growing_Cities,_How_can_England%E2%80%99s_successful_cities_build_the_homes_we_need%3F"
Create an article