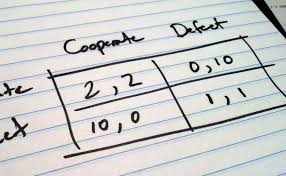 Game theory is the study of mathematical modelling techniques, used across many fields where some degree of strategy is needed. It can be used in construction as an efficient framework for decision-making and dispute resolution.

While it was originally based around zero-sum games – one person’s gains result in other’s losses – game theory today is more commonly used as a broad term for logical decision-making and can be used as a tool for project management.

Game theory was first developed in the 1950s by scientists such as John Nash and John van Neumann.

The reason for game theory’s applicability across many different disciplines is that it is concerned with decision-making among groups of people where the outcome for each person depends on the actions of everyone in the group. Using applied mathematics, predictions can be made regarding an individual’s decision-making strategy, depending on the choices and thinking of the others.

The ‘Prisoner’s Dilemma’ is a classic example of game theory, revealing why two ‘rational’ individuals may not choose to cooperate despite both being aware that to do so appears to be in their best interest.

Two prisoners are held for a burglary. Each prisoner is offered the following deals:

It is in both prisoners’ best interest to share the lesser sentence and not testify against one another. However, neither prisoner can be sure that the other will stay silent. According to game theory therefore, both prisoners will follow their self-interest and confess.

Game theory has also been used in the study of the construction bidding practices. Bidding is undertaken between competing parties, with conflict bringing into play many of the factors that influence the decision of the final bid.

A contractor may raise or lower their price due to a lack of information. The ‘winner’s curse’, usually associated with auctions, refers to a tendency for contractors to offer a price which reduces the prospects of the project being viable for them in terms of profitability. Winner’s curse can be attributed to :

An effective project manager, managing progress and deciding on priorities, will negotiate with a range of different stakeholders and arrive at solutions that are advantageous for the project as a whole.

When entering negotiations, they should consider:

By looking at the best possible outcomes and working backward from them using game theory, project managers may be able to identify and implement the optimum strategy.

Retrieved from "https://www.designingbuildings.co.uk/wiki/Game_theory_and_construction"
Create an article