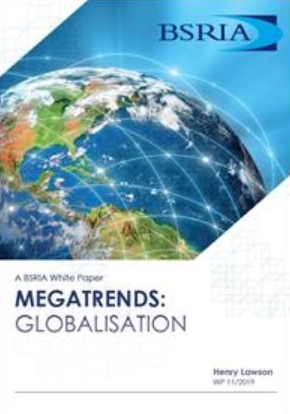 In the last of a series of four “Megatrends” white papers, BSRIA explores Globalisation, one of the defining issues of our age; one that affects almost every aspect of life and business, and one which is already having a big impact on Building Services across the world.

Globalisation has become one of the key phenomena of the modern life, but there is still a lot of controversy about what it actually means, let alone whether and how far it is to be welcomed.

In one sense we are seeing the emergence of a global society where you can walk down streets lined with similar looking shops promoting familiar global “brands” while jostling with other people wearing similar clothes to you who distractedly collide as they listen to similar music on their smartphones. All of this is underpinned by a global economic and financial “system” where economic shocks in one country can trigger a chain reaction around the world.

On the other hand, we have seen increasing resistance to globalisation, coming from both left and right for different reasons, reasserting an interest in national identity and autonomy on the one hand and aiming to rein in the power of global corporations on the other. There is also a growing awareness that global problems, such as climate change, require a global response, though even here there are disputes about how to achieve this.

The paper explores and analyses the four principle drivers of globalisation in the economic, political and cultural spheres and the technology that is enabling and accelerating the whole process. It also examines the many ways in which these drivers interact, often reinforcing each other.

It also looks at the developments which are working against globalisation or at least slowing it down (“slowbalisation”) or changing its character. It acknowledges areas of contention such as the environment where different aspects of globalisation are having a positive or a negative effect.

Finally, it examines the key ways in which globalisation is already affecting building services and how it may do so in future, drawing on BSRIA research into these areas and helping both business leaders and building specialists to prepare for this.

Henry Lawson, author of the paper commented: “What struck me most when I was researching and writing this, is how globalisation works its way into almost every aspect of our work and our personal lives, not to mention the big political issues. I also found it fascinating to delve further into the origins of globalisation, which go back a lot further than many people seem to think, and which are key to understanding what is happening today. As someone whose main focus is building services, I found that the impact of globalisation goes even beyond the expected areas. It also underlines to me the importance of the kind of global research and analysis that BSRIA has been focussing on for many years.”

Whether you see globalisation as an opportunity or a threat, or whether you simply want a clearer view of its complexities, this White Paper will be essential reading.

Megatrends: Globalisation is available from the BSRIA Bookshop.

This article was originally published by BSRIA in August 2019 here: https://www.bsria.co.uk/news/article/bsria-launches-white-paper-on-megatrends-globalisation/

Retrieved from "https://www.designingbuildings.co.uk/wiki/Megatrends:_Globalisation"
Create an article