Design Commission inquiry into design and behaviour in the built environment

On 8 June 2015, the Design Commission launched an Inquiry into Design and behaviour in the built environment with a call for evidence. 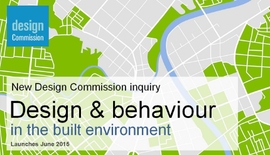 The Design Commission is the research arm of the All Party Parliamentary Design and Innovation Group (APDIG). It is an industry-led body, established in 2010 and comprises cross-party members of both houses along with leading members of the UK design industry. The secretariat is provided by Policy Connect, a social enterprise that promotes evidence-based policy development.

The Inquiry into design and behaviour in the built environment was launched at an evening discussion with Lord Richard Rogers and Professor Alan Penn, Dean of the Bartlett School of Architecture, UCL. The inquiry is being led by Alan Penn and Baroness Whitaker, vice chair of the APPDIG.

The Commission is inviting interested parties to submit their views on the following questions:

The deadline for submissions was Friday, 3rd July 2015. The inquiry will be holding round table evidence sessions in the Autumn and expects to report at the end of the year.

Retrieved from "https://www.designingbuildings.co.uk/wiki/Design_Commission_inquiry_into_design_and_behaviour_in_the_built_environment"
Create an article