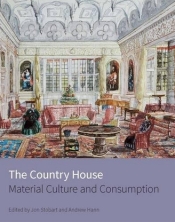 At first sight this looks like a coffee-table book, but the contents far outweigh the glossy exterior. The book records a conference at the University of Northampton in 2012, which was organised in conjunction with English Heritage, and with support from the Economic History Society. As the editors acknowledge, many books have been published on country houses, but this one differs by providing a collection of 19 essays on an area that is often overlooked, namely consumption. The essays are grouped into five collections.

The first five essays cover ‘Elites, consumption and the country house’, looking at the diversity of the ‘new luxury’, who the consumers were, and the demand and supply of these goods. ‘Continuity, heritage and the country house’ considers the show of wealth, and how ‘buying new’ was not always considered a polite thing to do. It explores the reasons why some houses were not modernised, which was not just due to financial reasons, as is often taken as the standard response.

The middle part looks at the influence of trade with the east, with a collection of four essays under the title of ‘Eastern connections, adoptions and imitations’. This discusses not only the nature of imports, but also how such articles had an effect on our architecture, interior design and social behaviour, the most obvious example being that of taking ‘tea’ in the afternoon.

Part Four covers the consumption of food within the country estate, how families settled into the new house, including choosing decorative schemes for new and existing buildings, and how music played a part in the social and cultural lives of the owners and their guests.

The last section examines the presentation of the country house, visitors’ experience and finally, in the context of Coleshill House, the estate that has lost its centrepiece. Here, the author Karen Fielder considers the problems presented to the modern-day visitor with interpretation and understanding of an estate where the house no longer remains.

The essays cover the period from the late 16th century to the Victorian era, each one providing responses to current questions around the culture and identity of the country estate, looking at their use and function, the demand for new luxury goods, how these were displayed for contemporary consumption, and how they might best be displayed to modern-day visitors. The authors, who come from a variety of backgrounds, challenge preconceived ideas about the architecture of the house and its social status.

It is a superb book, not only because of the quality of the illustrations and production, but because it provides new insights on the development of the country estate within the context of an increasingly materialistic nation

This article originally appeared in IHBC’s Context 150, published in July 2017. It was written by Janice Gooch, architectural historian and building surveyor.

Retrieved from "https://www.designingbuildings.co.uk/wiki/The_Country_House:_material_culture_and_consumption"
Create an article