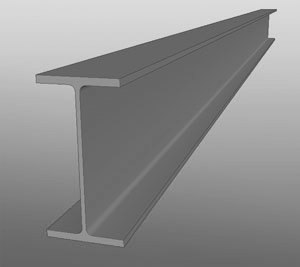 A rolled steel joist (RSJ) is a common type of beam used for structural steelwork. It is also known as an ‘I-beam’.

An RSJ is a beam with an ‘I’ or ‘H’-shaped cross-section that comes in a variety of standard sizes. It is a very efficient form for carrying bending and shear loads in the plane of the web (the vertical element).

RSJ's are usually made from mild steel but can also be formed from aluminium or other materials. They are formed by hot rolling, cold rolling or by extrusion.