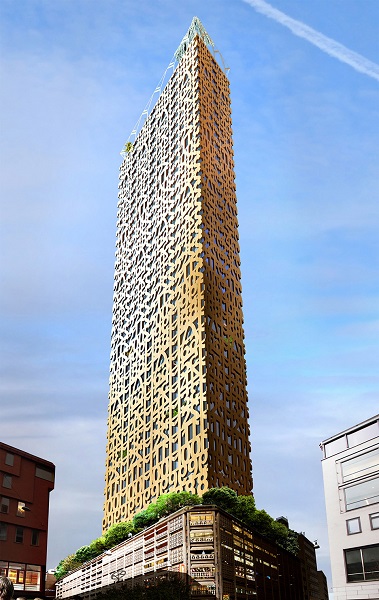 Conceptual designs for a timber skyscraper in Stockholm were released in April 2016 by Anders Berensson Architects. Commissioned by the Stockholm Center Party, Tratoppen (‘the tree top’) is intended to stand on top of the existing Parkaden car park, leaving the façade intact.

At 133 m, the building would be the tallest in Stockholm. According to the studio: ‘If we want to reduce the amount of cars in the city center of Stockholm, and at the same time make space for more housing without building on green areas, then replacing car parks with housing, shops and restaurants feels obvious.’

The 40-storey tower will be built out of cross-laminated timber (CLT), the façade being patterned with large numbers corresponding to the floor number. This will also create a sun screen, keeping the building cool and energy efficient. 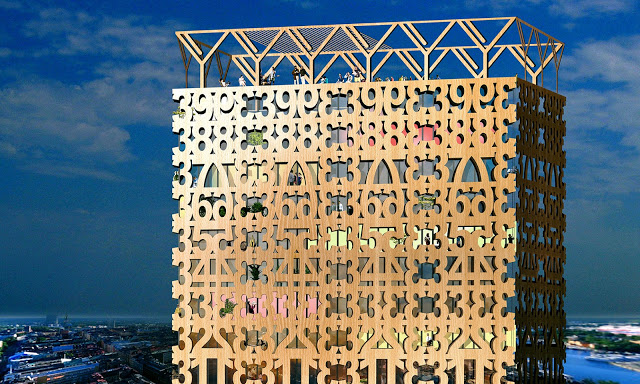 The architect said: “Today in Sweden, CLT is a rather new technique and is mostly used for low buildings, but we wanted to show its potential especially since Sweden has a big wood industry.”

The concept is that the tower will be built on top of the 1960s Parkaden car park, designed by Hans Asplund, but stepped back 6 m from the existing façade so as not to interfere with the car park’s character, and to create a large public terrace on the seventh floor. The car park structure itself wil be used for retail and restaurant space. 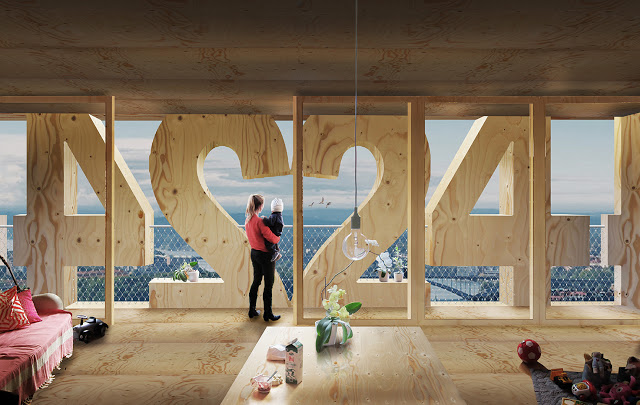 While there are no immediate plans to realise the project, the Center Party may commission the building in one form or another if they are voted into government at the next election. At the least though, it provides further evidence of architects viewing the use of timber as an increasingly promising and viable construction material, with recent projects proposed for London and Hyperion in Bordeaux.

Retrieved from "https://www.designingbuildings.co.uk/wiki/Tratoppen,_Stockholm"
Create an article