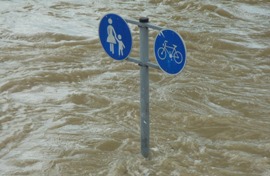 A 100-year event (or 100-year return period event) is an event that occurs (or is exceeded) on average once in every one hundred years (such as a storm, flood or rainfall event). This can also be expressed as 1 in 100 or 1:100.

For example, a 100-year storm is a storm that is likely to occur once every hundred years.

A ‘return period’ is an estimate of the likelihood of a particular event occurring. The return period of a rainfall event is the average time between events of at least a given magnitude.

The ‘critical duration’ is the duration of the event for a specified return period event.

Retrieved from "https://www.designingbuildings.co.uk/wiki/100-year_event"
Create an article