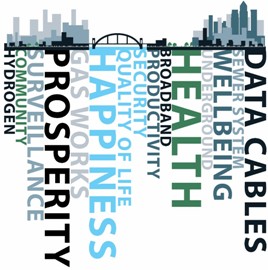 On Thursday 25 February 2016, the Happold Foundation, established by the late Sir Ted Happold and the founding partners of Buro Happold held a ‘City Conversation’ at the Building Centre in London.

The City Conversations are a series of discussions about the issues changing our cities; growth, technology, resource efficiency and climate change. This conversation focused on ‘The Invisible City’, the hidden infrastructure that is often described as ‘smart’. Considering the often invisible impact such 'smart technology' has on citizens, it posed the questions:

Chaired by Buro Happold’s Henry Fletcher, the speakers were:

In his introduction, Henry Fletcher described cities as ‘systems of systems’ and placed the word ‘smart’ or ‘digital’ within a social, environmental and economic context, asking whether current changes were making our cities more resilient or more vulnerable.

Judith Ward talked about the £11 billion roll out of 50 million smart gas and electricity meters in the UK, and suggested that this could create an improved public policy evidence base, but that nobody appeared to ‘own’ the issue and so the opportunity might be lost. Later in the debate she pointed out that the smart meter initiative was only projected to result in savings of 2-3% on energy bills, as people quickly stop paying attention to them and behaviour returns to normal. This is only projected to result in a net saving (once the cost of the initiative has been taken into account) of around £4 billion.

Stephen Hilton made clear he didn’t like the word ‘smart’ but preferred words such as ‘liveable’, ‘connected’ and ‘sustainable’. Smart technology is an enabler, it is not a goal in its own right. Bristol is in the process of building a new smart city control centre that will exploit the duct infrastructure it bought from Rediffusion, originally used to bring cable television to the city in the 1970’s. In thinking about the opportunities available from the rollout of networks and sensors, Bristol has begun to ask questions about the information they can and cannot use, such as the plethora of ‘private’ camera feeds that it would be useful to access during an incident.

Indy Johar criticised our tendency to treat issues as single solution problems, when in fact there are many possible intervention points for any one problem. He suggested that instigating change is becoming more complex, and that government is now only a small part of the picture. The social contract for change is evolving, and the availability of data is making it easier to build a business case for investment. But this poses questions, such as; what is the role for democracy, and where does legitimacy come from?

Hugh Knowles asked who in the audience wanted to live in a smart city. The second question, “why?” received the more hesitant response “well it must be better than living in a dumb one”. He highlighted the danger of ‘data spectatorship’ where sensors and networks collect information that nobody does anything about – telling us for example how late our bus is, but not making it any less late. We would be better, he suggested, to tackle the root of problems, rather than making existing solutions smarter.

Questions from the audience considered whether consumers were capable of exploiting smart technology and whether they understood the privacy and licencing implications of being connected.

The audience also asked whether ‘smart’ was always ‘good’ questioning the investment required compared to the benefit. Hugh Knowles gave the example of detectors in the homes of vulnerable people that could tell whether they were behaving normally or whether there could be a problem. What this actually meant was that people no longer needed to go and check on them to see if they were ok.

It was also pointed out that some things are easier to measure than others, but this is not always the right data to focus on. For example, it is easy to measure how long a doctor has spent with a patient, but it is less easy to measure the quality of care that they gave. Similarly, not all benefits are transparent. For example, improving insulation might not result in an energy saving as people with fixed incomes might simply be able to afford to turn up the heating, and so be more comfortable. If the landlord has paid for the improvement, they may see no benefit at all, whereas the NHS may see the benefit of fewer patients in the winter.

Realising the full potential for ‘smart’ was seen to be some way off, but there was agreement that more control would be a good start, and right now, a lot could be achieved if people would simply turn things off.

Retrieved from "https://www.designingbuildings.co.uk/wiki/The_invisible_city"
Create an article