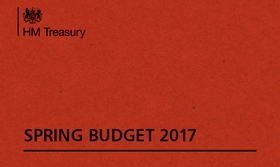 In a slimmed down budget, with the main statement coming in the Autumn, the headline announcement related to an increase in National Insurance Contributions (NICs) for the self-employed. From 2018, Class 2 NICs will be abolished, and Class 4 NICs will rise to 10%, then to 11% in 2019. This reflects the fact that the differences in contributory benefit entitlement between the self-employed and employees are now smaller. However, the change would affect nearly 100,000 construction workers.

The increase in NIC's was seen by some to conflict with a manifesto commitment not to raise NIC's, however, the government suggested that this commitment did not relate to Class 4 NIC's.

There were only two specific mentions of construction, a reference to a positive contribution to growth in 2016, with output increasing by 1.5%, and a reference to VAT fraud in the provision of labour. The government says it will consult on options to combat missing trader VAT fraud, in particular, applying the reverse charge mechanism so the recipient accounts for VAT.

There was a focus on productivity, which is currently 30% higher in the United States and 35% higher in Germany, and a stated intention to improve skills to tackle this.

The government suggest that technical education is confusing for students, with around 13,000 qualifications available, many of them of ‘little value’. Instead, new T-levels will be introduced, increasing the number of programme hours of training for 16-19 year olds on technical courses by more than 50%, and including the completion of a high-quality industry work placement.

There will also be new maintenance grants for a wider range of students, and a £300 million investment in new academic research placements in STEM (science, technology, engineering and maths) subjects.

The budget restated some of its commitments for the National Productivity Investment Fund (NPIF) providing £23 billion to 2021-22, with a focus on economic infrastructure, housing and R&D, including:

The government will also consult on extending the scope of Landfill Tax to illegal disposals of waste.

The Chancellor announced a Memorandum of Understanding on further devolution to London, including joint working to explore the benefits of, and scope for, locally-delivered criminal justice services; action to tackle congestion; and a taskforce to explore piloting a new approach to funding infrastructure.

Finally, the Chancellor pointed to the continuing development of the Northern Powerhouse and introduced the concept of a Midlands Engine Strategy, which will be announced in the future.

Chartered Institute of Building (CIOB) associate director Eddie Tuttle said; “We welcome the £500m increase in funding for technical education, though it is unlikely this will help reduce existing pressing skills shortages. Achieving greater parity between academic and vocational education and providing ‘work-ready’ employees is particularly crucial in construction. The offer within these ‘T-levels’ of a high quality work placement is vital; alongside further education institutes and employers, we as a professional body look forward to working with the government to develop these qualifications.

BSRIA Chief Executive, Julia Evans said; "This Budget is a ground-breaking one for skills which is welcomed by BSRIA. There has never been a more critical time for the UK to be able to sit at the worldwide ‘top table’ of technical education for young people. BSRIA is especially pleased to learn that £300m has been earmarked to support 1,000 new PhD places and fellowships in STEM (science, technology, engineering and maths) subjects."

British Property Federation chief executive Melanie Leech said; “This was possibly one of the least eventful budgets in recent memory, and we are thankful for that. The government had nothing to prove after two months of white papers and strategies, and the real estate industry will welcome the stability the budget signals.”

Federation of Master Builders (FMB) chief executive Brian Berry said; “Today’s budget was an all-round strong performance from the chancellor and he had good news to report right across the piece. However, increasing tax on the self-employed is not helpful. If we want to establish a resilient, Brexit-proof economy, we must encourage and support our current and future entrepreneurs in the construction industry and beyond.”

In a letter to MP's published in The Guardian on 15 March 2017, the Chancellor subsequently scrapped the planned increase in national insurance for the self employed, saying: “It is very important both to me and to the Prime Minister that we are compliant not just with the letter, but also with the spirit, of the commitments that were made. In light of what has emerged as a clear view among colleagues and a significant section of the public, I have decided not to proceed…”

FMB's Brian Berry said: “At a time when we need to do everything we can to ensure economic stability, this would have been a destabilising tax increase which would have hit large numbers of tradespeople on quite modest incomes... There is an important debate to be had about how we ensure an even playing field in the taxation of the self-employed and the directly employed. But we need to do that in a way that allows people to plan ahead and ensures the total package of tax and benefits is fair to the self-employed.”

Retrieved from "https://www.designingbuildings.co.uk/wiki/Spring_Budget_2017"
Create an article