On 20 April 2016, BSRIA and Designing Buildings Wiki launched the ‘Make Buildings Better’ competition, seeking ideas to improve the performance of buildings in use.

124 entries were received, proposing everything from networking groups of buildings to balance energy use, to running buildings on algae. The range of ideas submitted is illustrated below. 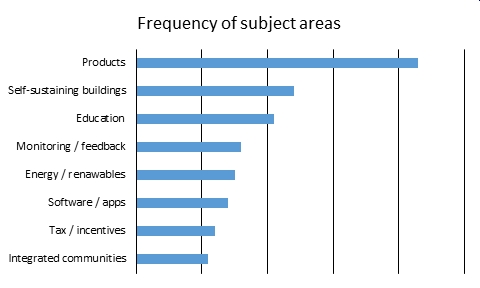 Despite the prevalence of innovative products among the entries, most participants didn’t actually think we need a raft of new solutions, but instead felt we should make better use of the ones we already have. Many existing buildings don’t even have double glazing or insulation.

Some of the most interesting ideas were about changing behaviour, with a general feeling that improvement will only come as a result of intervention, whether in the form of legislation, incentives, penalties, education or automatic controls.

The winning idea came from Tom Hughes, Director at architectural practice 2hD. Tom, who describes himself as an all-rounder, with a strong interest in technology, culture and community, has a PhD in the practice and theory of designing, building, and buying houses made of steel.

Tom wrote, “This flips the current situation, in which the easy-to-produce components are made off site and the very difficult junctions are made on site, under less-than-ideal conditions. Our experience tells us that buildings leak air and let in water at the junctions, not in the middle of elements, so the quality control of factory production is being applied in just the wrong places.”

The runners up were:

Gregor Harvie, Co-founder of Designing Buildings Wiki said, “It has been fascinating to see how radical many of the entries to the competition have been. People seem perfectly willing to contemplate the introduction of financial and behavioural pain and gain to force emission reductions through.”

Jayne Sunley, Knowledge Manager at BSRIA said, “We’re delighted with the variety and inventiveness of the entries submitted. Tom’s idea stood out as a genuinely practical and interesting way of tackling the performance deficit of buildings. So many problems occur at junctions, rather than within components themselves, it is an obvious place to focus attention”.

Retrieved from "https://www.designingbuildings.co.uk/wiki/Make_buildings_better_winners"
Create an article