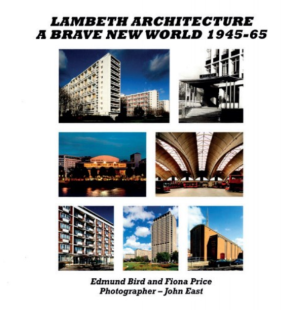 Lambeth suffered extensive bomb damage during the second world war, and was a focus for reconstruction in the post-war period. The birth of the welfare state heralded the age of modernist architecture, manifested above all in a huge public housing programme planned in the face of an unparalleled housing crisis. In 1951 the Festival of Britain brought international attention to Lambeth, and introduced a simple and joyful architecture that spoke of better opportunities for the borough’s citizens. The legacy of this ‘brave new world’ is the subject of the third book in a series written by Fiona Price and IHBC member Edmund Bird on the architecture of Lambeth in the 20th century. Following an introduction that outlines the social history of the 20-year post-war period, the book acts as a gazetteer, structured under building types. Housing forms the bulk of the entries, but there are significant sections on education, public and institutional buildings, ecclesiastical and public art, and sculpture. Each building is illustrated by fine photographs by John East which, with the informed text, are an incentive to explore this lesser-known area of London.

This article originally appeared in IHBC's Context 162 (Page 58), published by The Institute of Historic Building Conservation in November 2019.

Retrieved from "https://www.designingbuildings.co.uk/wiki/Lambeth_Architecture:_a_brave_new_world,_1945-65"
Create an article