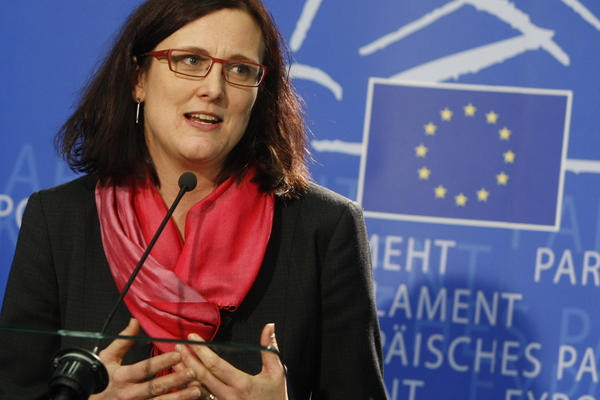 On 25 February 2016, Designing Buildings Wiki attended the China Association Lunch to listen to a talk by EU Trade Commissioner Cecilia Malmström on the topic ‘The EU and China: Trade and investment in the global economy’.

The event was hosted by the China-Britain Business Council, a board made up of senior business people, from companies across a wide range of sectors with a strong China interest.

To begin, Malmström emphasised that Chinese investment in the EU is four times what it was in 2008, and that Chinese growth in recent years has brought the country back to a more modern form of politics and has lifted millions out of poverty. However, she didn’t shy away from acknowledging that China’s human rights issues have begun to affect the business sector, with doubts hitting EU investment.

The biggest challenge is steel, with the current over-capacity being unsustainable. Malmström agreed that this is a major issue for many EU partners, and that she wrote to the Chinese Minister of Commerce to express concern and address the issue of over-production and the knock-on impacts this was having to steel producers, including in the UK. There are also internal discussions taking place with the European Commission and steel will be high on the agenda for the European Council meeting in March.

Despite ongoing dialogue with the Chinese and her assertion that there were ‘positive oral signals’, she stressed that the EU were monitoring the situation closely and were hoping to see positive action. Trade defence instruments on imports of steel are being used and 37 investigations are proceeding, although she was cautious to make clear there are no quick fixes and the investigations would need time to process all the evidence.

China’s dumping of cheap steel on the market highlights the concerns over their potential in the near future to attain Market Economy Status from the World Trade Organisation. These concerns are based on the EU potentially having a more difficult time imposing anti-dumping duties on Chinese goods. This is something that continues to be hindered due to the dominance of Chinese state-owned enterprises, despite China’s assertion that they will automatically be made a market economy by the end of 2016.

According to Malmström, free trade agreements have been proposed by China for many years, but the EU continues to hold firm on two main criteria: China’s commitment to the same agreements as other states, and their commitment to internal reforms. But she asked whether the EU was obliged to China on this issue anyway?

The EU is the only entity in the world that has laws on Market Economy Status, as opposed to other countries such as America and Australia. There is a need for detailed impact assessments to be carried out on a sector-by-sector and country-by-country basis.

So whilst difficulties are ongoing, there are also possibilities. She expressed hope that a single modern trade agreement with China might replace the 26 bilateral agreements that currently exist, thereby allowing greater investment opportunities.

An audience member raised the point that since the Chinese view trade as ‘trade lines’ not ‘trade blocks’ would ‘Brexit’ make any real difference? Malmström said that negotiating as 28 nations, the largest economy in the world, carries more weight than negotiating trade agreements alone and stated her belief that most Chinese investors would prefer to invest in a Britain within the EU than outside.

Find out more about the China-Britain Business Council here.

Retrieved from "https://www.designingbuildings.co.uk/wiki/Britain-China_trade_and_investment"
Create an article