The scientific community has warned that there is an urgent need for a transition to a low carbon economy if we are to avert a global catastrophe due to climate change.

The UK has relatively good and easily exploited wind resources:

Wind is the most developed renewable energy source in the UK.

[edit] Wind installations in the UK

The first British wind farm was established in 1991 at Delabole, Cornwall. Since then, largely due to the government's Renewables Obligation, UK wind energy capacity has flourished and is now considered one of the best locations in the world. In 2012, the UK was the world leader in offshore wind.

In 2017, wind power contributed 15% of the UK's electricity generation. 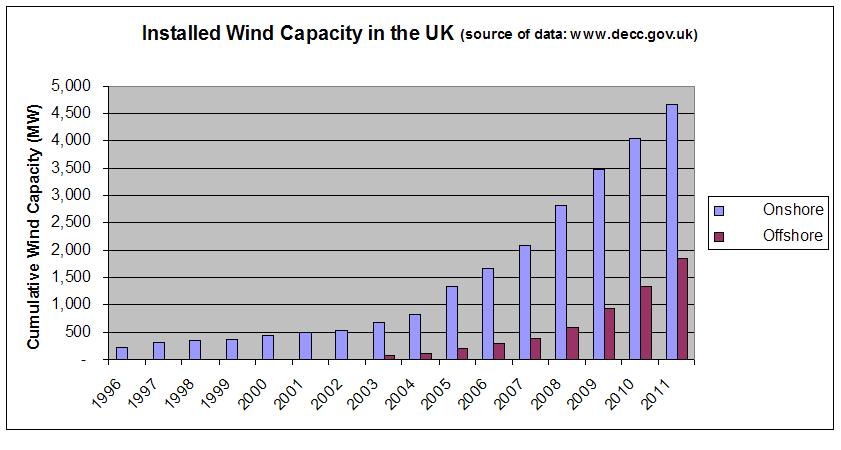 There are some vocal opposition groups to wind power who object to new wind farms being built in their area, claiming that they are noisy, a danger to wildlife and a blight on the countryside.

However, by and large, the British view wind power in a favourable light. In surveys carried out in 2012 for RenewablesUK, the body which champions UK wind and marine energy, and for the Sunday Times, it emerged that:

Analysis from the Carbon Trust suggests offshore wind has the potential to deliver significant benefits to the UK, including:

The 8 countries with the most installed capacity are (2011 figures, GW):

The UK had the 5th largest installed capacity in Europe at the end of 2011; this reflects its fairly late uptake of wind power compared for example with Germany, which has by far the most capacity, or Spain.

NB: RenewableUK claim that a new UK record was achieved for wind energy on 17 August 2014, when 22% of the UK’s electricity was generated by wind, an average of 5,797 MW.

The main figures in the body of this article are in urgent need of updating!

So update it. This is a wiki site, written by its users.