Ice can be used as an effective means of thermal storage, storing ‘coolth’ in colder parts of the day to provide cooling during warmer parts of the day. Thermal storage for cooling can be a useful way of achieving efficiency and carbon emission reductions in climates with wide daily temperature variations, especially in areas where water is not available for heat rejection. It can also be a useful way of gaining utility incentives and reducing peak demand charges.

For ice storage systems, the heat absorption rate of the system is reduced as more of the ice is melted. The capacity of the system should factor in when the peak heat absorption rate is required as the stored energy is used. It may not be detailed enough to integrate the load profile over the period for which storage will be used and size the system on that alone. The storage system may end up undersized as a result.

Wet bulb temperatures vary over a narrower range than dry bulb temperatures so with water-cooled systems the carbon benefits are seen on the electric utility side where efficient base load powerplants shoulder a higher load than inefficient "peaking" power plants.

The total installed chiller capacity (both glycol and conventional) for an ice system should be around 65% of the total peak cooling load. This will however depend entirely on the load profile. The purpose of using conventional chillers is to meet the base load ie the consistent load that exists right through the night, this also simplifies control as there is no simultaneous ice building and direct cooling. An example of a load profile is shown below. 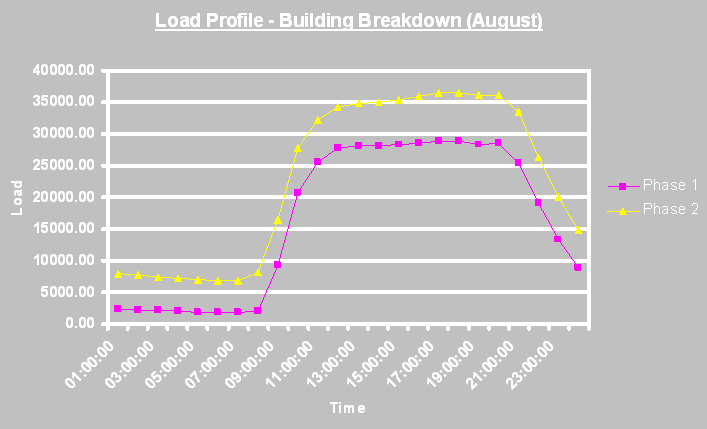 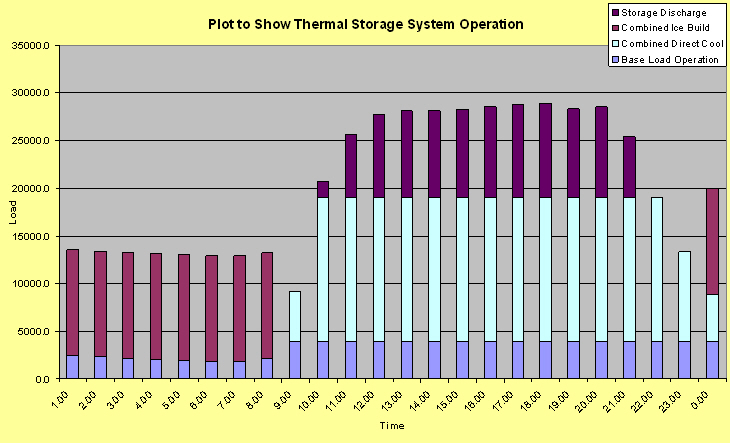 In this case, there were four ice chillers each at around 3800kW arranged in modules, which is how they achieve the simultaneous cooling and ice building at 0:00. Thus the ice chillers ran during the day; the glycol did not affect the COP (coefficient of performance) too much as they ran at normal temperatures during the day. The capacity was derated due to the heat transfer reduction of the glycol, but the actual efficiency may only have reduced by about 10%. When they reduced to operate in night mode the output was always derated, usually around 60% but the efficiency again was still good because of the cooler night time temperatures.

The split between baseload and ice chillers is highly dependent upon load profile but it will range typically from around 25-50% baseload chiller. For a 24 hour operating building it will be closer to 50%. 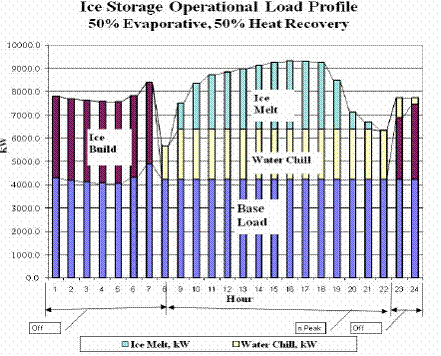 In terms of overall energy savings, they are most effective when using air cooled chillers when there is a peak diurnal range of at least 10°C. Another good way to improve efficiency is to harness a large delta T; use the chillers to precool the water at a higher than usual temperature 15-8° and then go through ice to go from 8-3. This means that the chiller operates at more favourable conditions. Then consider the operating savings connected to fans and pumps. This means the overall savings are not easy to predict without a significant amount of detail, but with air cooled chillers there will be savings.

All of this assumes the use of a peak lopping system which gives optimum capital expenditure (capex). Using a full storage system is more efficient as all cooling occurs at night but the capex is much higher as there will generally need to be more chillers than a conventional system in addition to the ice.

Finally in terms of space, ice storage systems don’t save huge amounts on the central plant, the ice tanks do need space but the chiller farm size is reduced (which would be difficult to hide architecturally). This is particularly true for large air-cooled plants. There are then space savings from the large delta T and low temperature which reduces ducts/pipes and airhandling plant.