The thermal behaviour of spaces enclosed by fabric membranes

The findings in brief:

This thesis describes a programme of research the aim of which was to investigate the thermal behaviour of spaces enclosed by fabric membrane envelopes.

Initial analysis suggested that a fabric membrane can affect conditions within a space enclosed by it as a result of its internal surface temperature and the amount of radiation it directs into that space. In order to investigate these parameters, a test cell was constructed which allowed the thermal behaviour of a range of fabric membranes to be monitored.

The monitored data revealed that the thermal behaviour of fabric membranes is entirely dictated by their angular thermal optical properties. These properties were measured and a dynamic spread sheet model was developed which was able to simulate the monitored behaviour fairly accurately.

In order to investigate the thermal behaviour of spaces enclosed by such membranes, conditions within four existing fabric roofed buildings were monitored. The monitored data revealed that comfort temperatures could vary significantly from place to place within such spaces. These variations were produced by both the stratification of internal air temperatures and differences in internal radiant temperatures.

An attempt was made to simulate the behaviour of the buildings monitored, using a general applications CFD code in conjunction with information generated by the spread sheet model. Whilst some behaviour patterns could be simulated accurately using this approach, it was apparent that the simplification of boundary conditions in the CFD code meant it was unable to accurately predict strong internal stratification.

It was proposed that improving the reliability of this process would require the development of a specialist CFD model able to dynamically simulate both the behaviour of the fabric enclosure and the internal space. 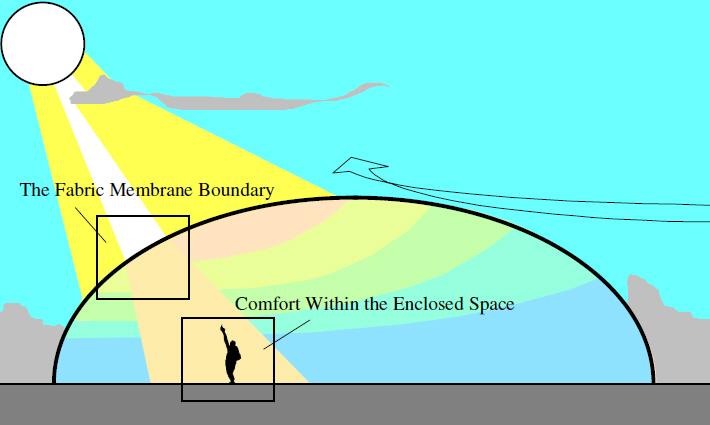