Central Slough is undergoing a comprehensive regeneration programme. The Heart of Slough development replaces a number of outdated office buildings, the original bus station and a gyratory system with new commercial and civic facilities and a pedestrian friendly roadway and interchange.

The first building delivered was the new Slough Bus Station, which was opened to the public in May 2011. It aims to serve as a catalyst for further development, and links the Victorian main line train station to the town centre. Its sleek sculptural form puts Slough firmly on the architectural map.

The architectural solution for the new bus station provides an uplifting, positive and memorable first and last impression of Slough.

The location of the bus station is a key area in the developing, high-quality, public-realm strategy for the Heart of Slough regeneration. The site for the bus station lies on a new, key north-south pedestrian route. The scheme concept envisages the creation of a new town square, and so the structural form has to fulfil an important role as a placemaker.

The structures of bus accommodation building and canopy are designed to mediate between pedestrians using the new north-south route and the needs of waiting passengers. The single structural form has to enclose the waiting area, while also providing a clutter free passenger environment. Strategic column locations and arch spring points ensure separation from the bus movement area and provide clearance for buses.

The design is visible from the listed Railway Station on Brunel Way and the new public realm associated with the proposed new library on Wellington Street and St Ethelburt’s Church, which is also listed. Visual impact in terms of scale and relationships with surrounding areas was a key consideration in the development of the form. In particular the scheme seeks to add a quality modern building that will compliment the neighbouring listed buildings. This required a design that is light and elegant.

The architectural vision for the bus station was to create a piece of functional sculpture, which would be a landmark for the town and a feature of which its residents would be proud.

The wave-shaped form was conceived so as to respond to the differing levels of weather protection required by passengers and buses. Extensive use of engineering modelling technologies linked the structural form to the comfort of the pedestrian and functioning of the station. This process determined the location of the columns and the setting out for where the structure envelops the waiting and ticket facilities.

This structural engineering form led to a highly efficient of use of steel trusses spanning 50 metres from the accommodation block at one end, to a single point of support at the other. The long-span solution was rationalised into a pair of separate steel trusses, framed out with secondary and tertiary steel members ensuring.

The primary undulating steel trusses define the building’s elegant form. The trusses are parallel in plan and of consistent depth over their length. They vary in height above the ground resulting in an out-of-phase rippling effect. The sense of movement is enhanced by the aluminium shingles in which the structure is clad. This softly textured metallic surface changes colour with varying light conditions and also allowed the complex form to be achieved cost effectively.

The sensual skin belies the complications involved in the structural design, with the dynamic response of the canopy to wind and differential deflection between canopies. The trusses are also designed to be extended for future expansion, giving an added complication of different load cases and structural detailing.

The design team worked with the steelwork contractor from early in the design process to determine the most efficient and practical way to get the trusses to site and fixed into position. It was important to ensure that the complex shapes could be fabricated and installed accurately. 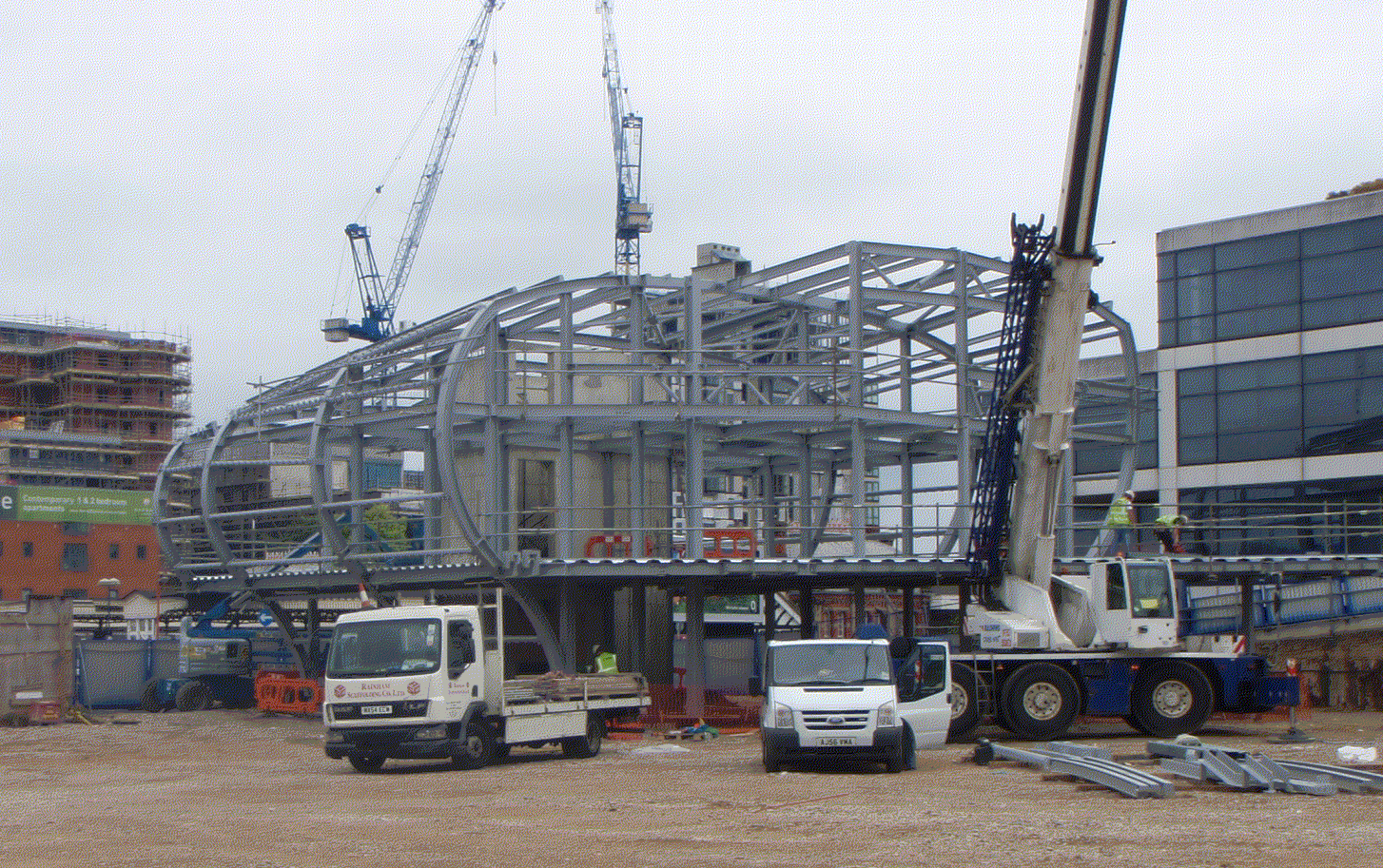 The design process considered fabricating the trusses in both open section and in tube, to ensure the optimum solution was selected. The circular hollow section chosen was slightly lighter, and it was significantly easier to detail the connection for the cladding brackets which define the external surface. Although the raw material cost was slightly higher than for an open section, the overall solution was more cost effective, especially as it allowed higher repetition and standardisation of components and connections.

Each truss was manufactured in fabricators works to ensure the correct profile was achieved, and then split into 3 pieces for transportation to site. The bulk of the fabrication was therefore carried out offsite giving benefits in terms of health and safety, transport costs, and the ability to complete as much work as possible in a quality-controlled environment.

At one end, the trusses are supported by the accommodation building, with connections hidden beneath its roof. The support, to the top chord only, acts as a rocker pin allowing thermal expansion and accommodating movement without locking stresses into the structure. A structural movement joint was avoided, although a clever overlap shingle joint was incorporated into the cladding to accommodate the movement at the interface between canopy and the building.

At the other end, a seemingly random forest of slender columns supports each of the trusses. These were designed to act as a single-pinned support at both their head and base, and were portalised in the orthogonal direction to provide lateral stability to the trusses. Some also act as rainwater downpipes.

The completed Slough Bus Station project is an impressive feat of integrated engineering and structural excellence. It is a result of integration of engineer, architect and fabricator to create a buildable structure. The use of building information modelling (BIM) technology ensured accuracy of construction and modelling of the construction phasing allowed prediction of construction deflections.

Slough Bus Station was delivered under challenging procurement conditions, due to phasing and adjacent works, at a time when public investment was under scrutiny. Yet it was delivered on time and on budget. It demonstrates how intelligent design and development of simple solutions to resolve a complex form can deliver a building that is highly functional and aesthetic pleasing. It is a building with structural engineering to the fore

The article on Slough Bus Station ignores the reality of users' responses, which have been uniformly negative in terms of the functionality and user-friendliness of the environment that it provides. It is described as a bleak and inhospitable environment for passengers & bus drivers alike. Users describe it as not being weather proof and offering little sanctuary whilst waiting for buses