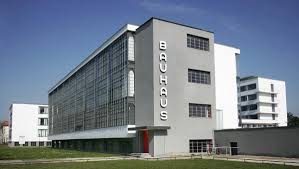 The Bauhaus was the most influential modernist art school of the 20th century, one whose approach to teaching, and understanding art's relationship to society and technology, had a major impact both in Europe and the United States long after it closed.

It was shaped by the 19th and early-20th century trends such as the Arts and Crafts movement, which had sought to level the distinction between fine and applied arts, and to reunite creativity and manufacturing. This is reflected in the romantic medievalism of the school's early years, in which it pictured itself as a kind of medieval crafts guild.

In the mid-1920s, the medievalism gave way to a stress on uniting art and industrial design, and it was this which ultimately proved to be its most original and important achievement. The school is also renowned for its faculty, which included artists Wassily Kandinsky, Josef Albers, Laszlo Moholy-Nagy, Paul Klee and Johannes Itten, architects Walter Gropius and Ludwig Mies van der Rohe, and designer Marcel Breuer. 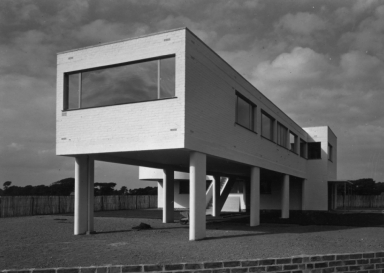 The motivations behind the creation of the Bauhaus lay in the 19th century, in anxieties about the soullessness of manufacturing and its products, and in fears about art's loss of purpose in society. Creativity and manufacturing were drifting apart, and the Bauhaus aimed to unite them once again, rejuvenating design for everyday life.

Although the Bauhaus abandoned much of the ethos of the old academic tradition of fine art education, it maintained a stress on intellectual and theoretical pursuits, and linked these to an emphasis on practical skills, crafts and techniques that was more reminiscent of the medieval guild system. Fine art and craft were brought together with the goal of problem solving for a modern industrial society. In so doing, the Bauhaus effectively leveled the old hierarchy of the arts, placing crafts on par with fine arts such as sculpture and painting, and paving the way for many of the ideas that have inspired artists in the late-20th century.

The stress on experiment and problem-solving at the Bauhaus has proved enormously influential for the approaches to education in the arts. It has led to the 'fine arts' being rethought as the 'visual arts', and art considered less as an adjunct of the humanities, like literature or history, and more as a kind of research science.

The Bauhaus, a German word meaning ‘house of building’, was a school founded in 1919 in Weimar, Germany by architect Walter Gropius. The school emerged out of late-19th century desires to reunite the applied arts and manufacturing, and to reform education. These had given birth to several new schools of art and applied art throughout Germany, and it was out of two such schools that the new Bauhaus was born.

Gropius called for the school to show a new respect for craft and technique in all artistic media, and suggested a return to attitudes to art and craft once characteristic of the medieval age, before art and manufacturing had drifted far apart. Gropius envisioned the Bauhaus encompassing the totality of all artistic media, including fine art, industrial design, graphic design, typography, interior design, and architecture. 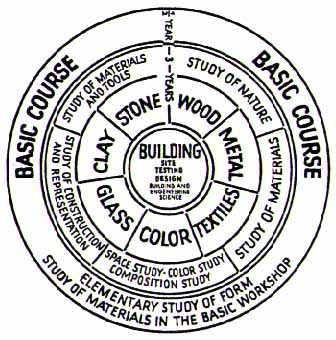 Central to the school's operation was its original and influential curriculum. It was described by Gropius in the manner of a wheel diagram, with the outer ring representing the vorkurs, a six-month preliminary course, initiated by Johannes Itten, which concentrated on practical formal analysis, in particular on the contrasting properties of forms, colours and materials.

At the centre of the curriculum were courses specialised in building construction that led students to seek practicality and necessity through technological reproduction, with an emphasis on craft and workmanship that was lost in technological manufacturing. And the basic pedagogical approach was to eliminate competitive tendencies and to foster individual creative potential and a sense of community and shared purpose.

The creators of this program were a fabulously talented faculty that Gropius attracted. Avant-garde painters Johannes Itten and Lyonel Feininger, and sculptor Gerhard Marcks were among his first appointments. Itten would be particularly important - he was central to the creation of the Vorkurs, and his background in Expressionism lent much of the tone to the early years of the school, including its emphasis on craft and its medievalism. Indeed, Itten's avant-gardism and Gropius' social concerns soon put them at odds.

By the early 1920s, however, Gropius had won out; Itten left and was replaced by Laszlo Moholy-Nagy, who reformed vorkurs into a program that embraced technology and stressed its use for society. Other important appointments included Wassily Kandinsky, Paul Klee, Georg Muche, and Oskar Schlemmer.

In 1925, the Bauhaus moved to the German industrial town of Dessau, initiating its most fruitful period. Gropius designed a new building for the school, which has since come to be seen as a landmark of modern, functionalist architecture.

It was also here that the school finally created a department of architecture, something that had been conspicuously lacking in an institution that had been premised on the union of the arts. But by 1928, Gropius was worn down by his work, and by the increasing battles with the school's critics, and he stood down, turning over the helm to Swiss architect Hannes Meyer. Meyer headed the architecture department, and, as an active communist, he incorporated his Marxist ideals through student organisations and classroom programmes. The school continued to build in strength but criticism of Meyer's Marxism grew, and he was dismissed as director in 1930, and after local elections brought the Nazis to power in 1932, the school in Dessau was closed.

In the same year, 1932, it moved to Berlin, under the new direction of architect Ludwig Mies van der Rohe, an advocate of functionalism. He struggled with far poorer resources, and a faculty that had lost some of its brightest stars; he also tried to remove politics from the school's ethos, but when the Nazis came to power in 1933, the school was closed indefinitely.

The Bauhaus influence travelled along with its faculty. Gropius went on to teach at the Graduate School of Design at Harvard University, Mies van der Rohe became Director of the College of Architecture, Planning and Design, at the Illinois Institute of Technology, Josef Albers began to teach at Black Mountain College in North Carolina, Laszlo Moholy-Nagy formed what became the Institute of Design in Chicago, and Max Bill, a former Bauhaus student, opened the Institute of Design in Ulm, Germany.

The latter three were all important in spreading the Bauhaus philosophy. Moholy-Nagy and Albers were particularly important in refashioning that philosophy into one suited to the climate of a modern research university in a market-oriented culture; Bill, meanwhile, played a significant role in spreading geometric abstraction throughout the world. 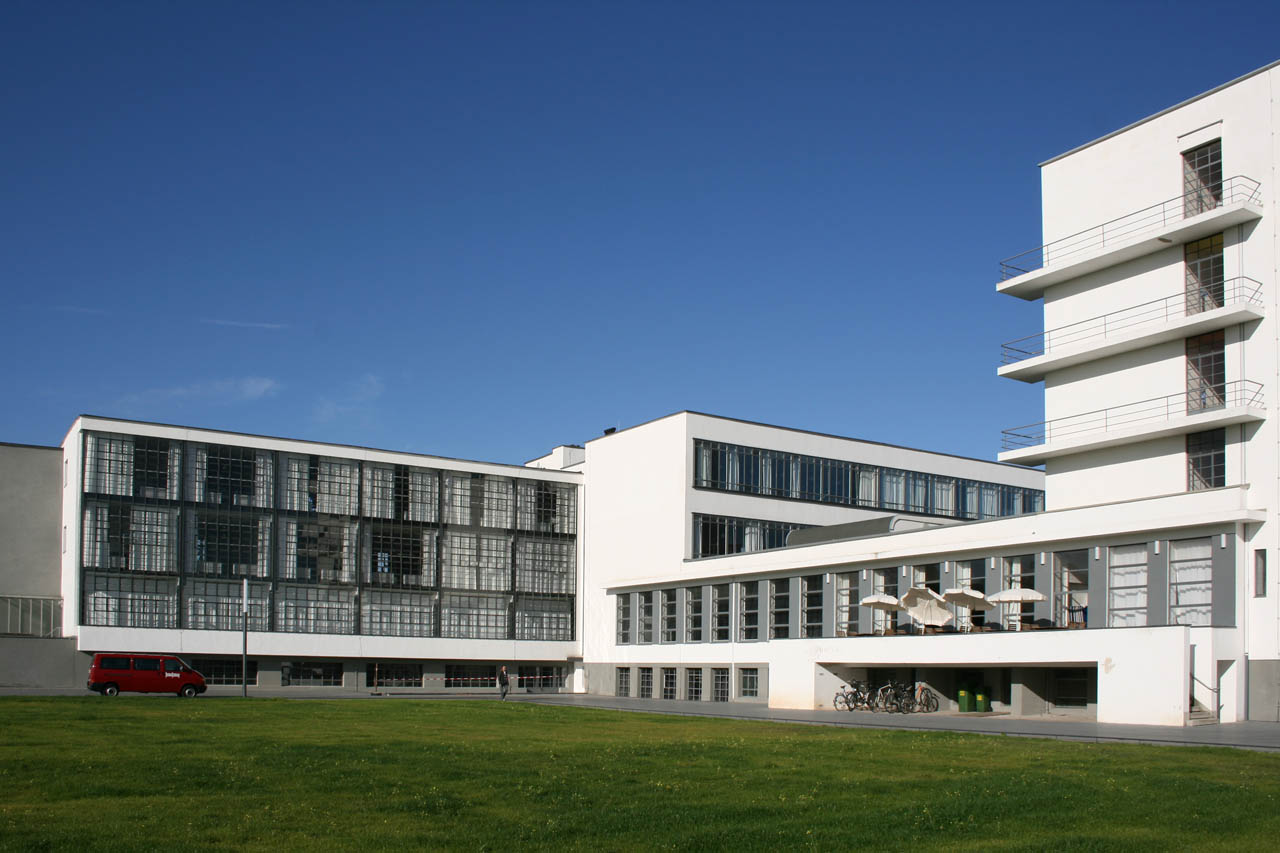 Gropius's complex for the Bauhaus at Dessau has come to be seen as a landmark in modern, functionalist design. Although the design seems strongly unified from above, each element is clearly divided from the next, and on the ground it unfolds a wonderful succession of changing perspectives.

The building consists of an asphalt tiled roof, steel framework, and reinforced concrete bricks to reduce noise and protect against the weather. In addition, a glass curtain wall – a feature that would come to be typical of modernist architecture - allows in ample quantities of light. Gropius created three wings that were arranged asymmetrically to connect different workshops and dormitories within the school. The asymmetry expressed the school's functionalist approach and yet retained an elegance that showed how beauty and practicality could be combined.

This article was contributed by --The Art Story

Yes again this is a wonderful.article and very informative equal to Modernist Architecture article. I remembered very well the most influential Artist of Bauhaus was Artist Mondrain. He who reduced his painting of landscape to colour rectangular shapes of different sizes . This was translated into buildings and furniture designs of Bauhaus movement. This bring me back to my younger days in Modern Architecture in Sch of Arch . lectures room n at times in RIBA Center in London during my student's days. Thanks.

Thanks for your positive comments George.