A new capital for the UK

Relocating the British capital out of London would regenerate the regions, save money, and perhaps even rescue the UK itself, writes architect James Dunnett.

The mother of parliaments is in a parlous condition, physically if not democratically. The price of refurbishing the Palace of Westminster, the seat of the British Government in London, has been quoted at around an eye-watering £3 billion. 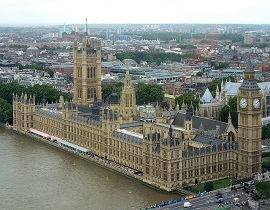 Unsurprisingly, the question of relocation has been raised – and not for the first time. To mark the centenary of the proclamation moving the capital of British India from Calcutta to Delhi, I suggested that Britain might contemplate a similar move itself. This would be a means to counter effectively the spiraling drain of wealth and economic activity to the south-east corner of the country, and also to respond to growing separatist political movements by establishing a capital for the UK that was shared equally, being more geographically central. The suggestion was not that a new city be built on a green-field site, but that it be planted in a decayed urban area to give form and hope.

I proposed West Bromwich as a possible starting point for the search of such a site, being at the hub of the motorway network and with its high street having had among the highest vacancy rates in the country. 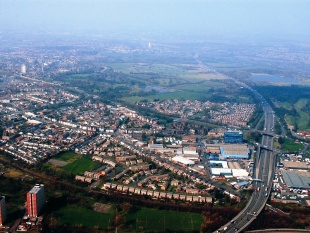 In the past several years, these considerations have become stronger – the disparity in income and property values between London and the rest of the country has continued to grow, as has support for separatist parties – and a further factor has been added, relatively minor in economic scale even if major in symbolic value: the £3 billion price tag (the Government has started a search for architects to convert temporarily an existing building nearby for use by Parliament while the projected five-year refurbishment takes place). This third factor in particular has prompted influential pundits such as National Trust Chair Simon Jenkins and Ian Jack to speculate that possibly Parliament should be relocated elsewhere, perhaps in the north of England.

‘Nothing would do more to correct the metropolitan centralism of modern government’, writes Jenkins. ‘A regional move would reassert parliament as a popular congress of a united kingdom. It would be a gathering of the commons, not a colloquium of elites.’

But the conversation is always framed as a temporary, rather than a permanent move of the capital. During these four years some politicians have also spoken about the urgent need to ‘rebalance the economy’ in regional terms (Michael Heseltine), or proposed moving just the House of Lords to Leeds (Lord Adonis).

By contrast to these tentative proposals, the Egyptian Government announced in March 2015 its intention to build in as little as five to seven years ‘a brand new capital city …in undeveloped desert east of Cairo …with a new airport …Its main function would be to house government departments, ministries, and foreign embassies.’ This new city, being planned by SOM, ‘could be completed by 2020’.

On a rather longer timescale, it is noteworthy that in 1990 the Japanese Government resolved to investigate moving the political capital away from Tokyo. Since then reports have been written, parliamentary committees established and the issue progressed. One of the significant reasons for such a move is that it would be better to have the capital of government and the capital of business in different locations in the event of a catastrophic earthquake (or, one might add remembering Fukushima, nuclear power station meltdown provoked by an earthquake).

One of Lenin’s earliest acts was to move the capital of Russia from St. Petersburg to Moscow, the medieval capital – a move that the fall of Communism has brought no known calls to reverse. The Capital bespeaks the philosophy of a nation. It would be hoped that a new capital for the UK would reflect in its conception a new spirit of clarity and rationality in the thinking of its government, a readiness to plan, and an egalitarian outlook. 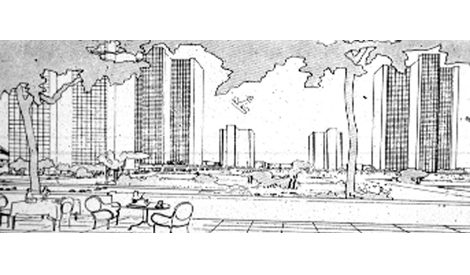 Le Corbusier uniquely presented in his City of Three Million study of 1922, the image of such a city, paradoxically free of monumental buildings but dominated by those for administration, and by the constant calm horizontal of their skyline. The elements of urbanism, he said, were ‘light, space, greenery, steel and concrete – in that order.’

Without geometry also there could be no order, no form, and no calm – a geometry he was to impose on the new capital of Punjab, Chandigarh. Of the two ‘capitals’ recently built in the UK – Canary Wharf, second capital of commerce, and the Olympic Park, capital of sport – the former has a clear geometric layout while the latter is formless. Lutyens’ New Delhi, planned 10 years earlier than the City of Three Million, had geometry and form, light, space, and greenery, and it excited Le Corbusier even if, focused on the Viceroy’s Lodge, it was far from egalitarian. That a city could be open to nature and embrace the sense of space and scale were ideals the two had in common.

They should inspire also a new Capital for the UK, without which no effective solution to rebalance the economy has yet emerged.

I agree with the principles, but Amsterdam is most definitely the capital of the Netherlands. It's an anomaly in that its capital status is enshrined in the national constitution, despite not being the seat of government.

Even if talking about seat of government, it's not true to say Amsterdam has never held that position.